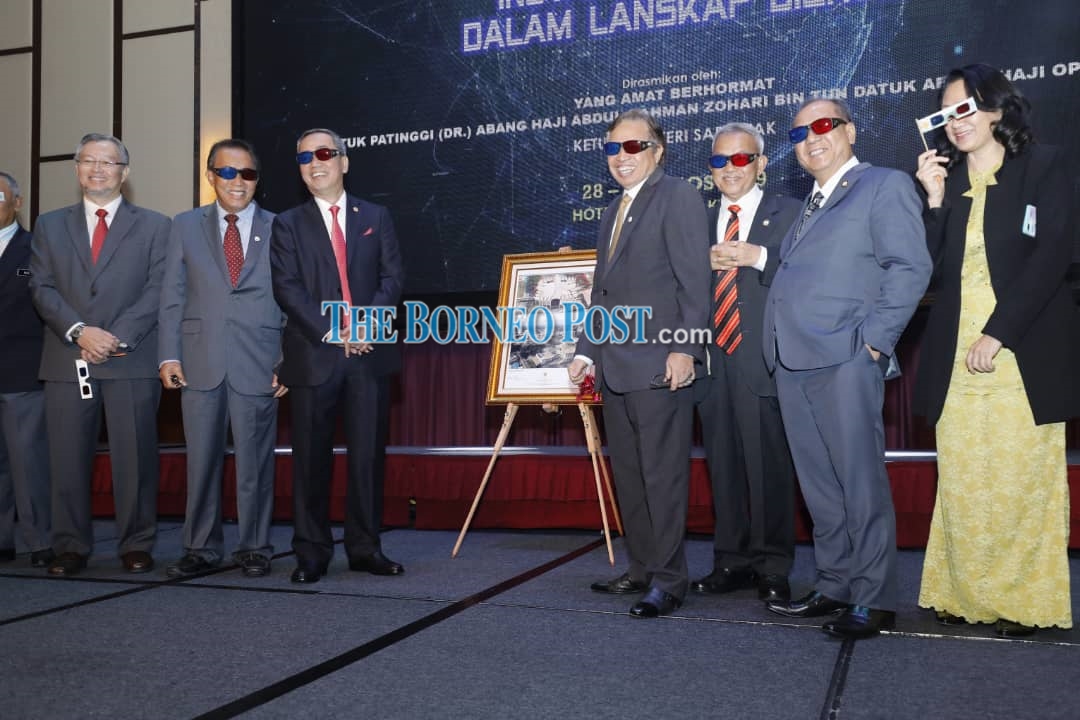 Caption: Abang Johari (fourth right), Zaidi (third left) and other dignitaries in their 3D glasses which they use to view the 3D image of the Sarawak Museum Campus on stage.

KUCHING: Sarawak government has approved the recruitment of additional manpower for Land and Survey Department to increase its existing capacity especially in perimeter survey of native customary rights (NCR) land.

“NCR is a sensitive issue. When there is problem, there will be people who will ‘gago’ (busybody) and take the opportunity to fan up the issue. Mind you out there, there are those who are ‘tukang kipas’ (fanning up any issue).

“Therefore, when the department’s director said there is not enough manpower in handling matters such as NCR, we approved the request in order to increase its capacity,” he said when launching the department’s Innovation and Integrity Day 2019 today.

Earlier, Land and Survey director Zaidi Mahdi said an additional manpower of 467 officers of various categories had been approved for the department.

He pointed out that since Sarawak government had allocated RM40 million for NCR Perimeter Survey Programme this year, the increase in capacity would enable the department to be more effective in carrying out its duties in line with the government’s aspirations.

He said this would dispel negative perception of delay in transaction due to favouritism as wrongly painted by many.

He also praised the department for embracing technology by coming up with innovations such as Land and Survey Information System (Lasis) which is a mobile application allowing users to gain immediate information.

He singled out another innovation called Sarapeg has also won many awards nationally and internationally including Receiver of International Federation of Investors Association (IFIA) Best Invention Medal 2019.

“I am proud that Sarapeg won despite competing with entries from private sector,” he said.