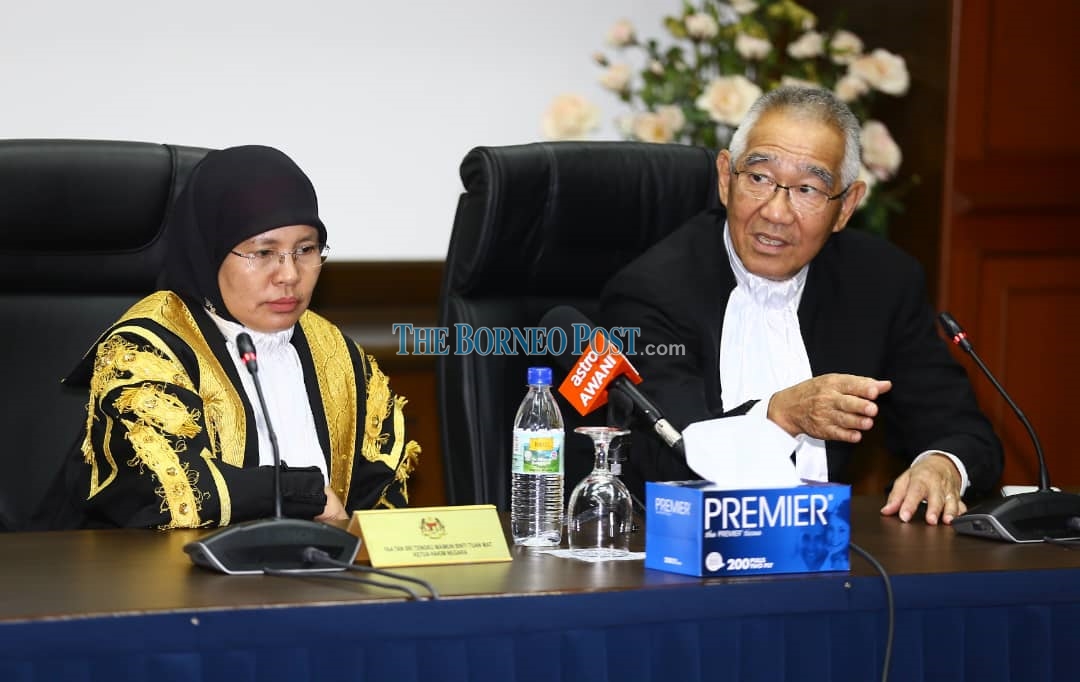 Maimun and Wong co-chairing the press conference after the AI demonstration at the Courthouse complex in Kuching. Photo by Muhd Rais Sanusi

Artificial Intelligence to be applied in Sarawak courts

KUCHING: Courts in Sarawak are set to use Artificial Intelligence (AI) to provide judges with guidelines and analysis in their duty to mete out suitable jail penalties and fines.

The AI analysis will also allow prosecutors and lawyers to know in advance the potential outcome of judgement, said Chief Justice of Sabah and Sarawak Tan Sri Datuk Seri Panglima David Wong Dak Wah when met after the ceremony to mark the beginning of the Sarawak and Sabah Legal Year today.

Wong said the application was timely because in the past there were complaints in regards to disparity and inconsistency of penalties passed by magistrates or judges.

The AI application will be operational once the ground rules are created and ready in a week, he added.

“Actually it is ready. We are still in the process of creating the ground rules. The way or how it works will be made known to the accused persons and they will know in advance the likely outcome of their cases. Then it will be up to them to plead guilty or to plead not guilty.”

“As everything is already digitalised, the ‘machine’ will be able to capture historical data. That is why we are able to get this up and running quick,” said Wong.

Earlier on, judges and invited guests were invited to view a demonstration of the AI in action.

The AI application is the pilot project of SAINS.

The demonstration was held as one of the programmes for the opening of the Legal Year for Sabah and Sarawak 2020.

AI data sentencing isn’t new – it’s been used in America and China but to mixed reactions.

“Such technological advancements are here to stay and we need to move along with it. If this the system (AI) is coming to us, I don’t see the reason why we should not embark on it. But as we go along with it we also cannot 100 per cent rely on it and so there must be some human element as well,” she said when asked to comment on the AI application.

The usage of AI was first mentioned briefly by former Chief Justice of Sabah and Sarawak Tan Sri Datuk Seri Panglima Richard Malanjum during the opening of the Legal Year for Sabah and Sarawak in January 2019 when he was listing down the potential digital applications to improve efficiency of the courts in the two states.

As for the use of AI, a data-driven feature called ‘data sentencing’ is currently being fine-tuned before it is introduced in the courts and this will help or guide judges and officers with the sentencing process, he said back then. –Borneo Post