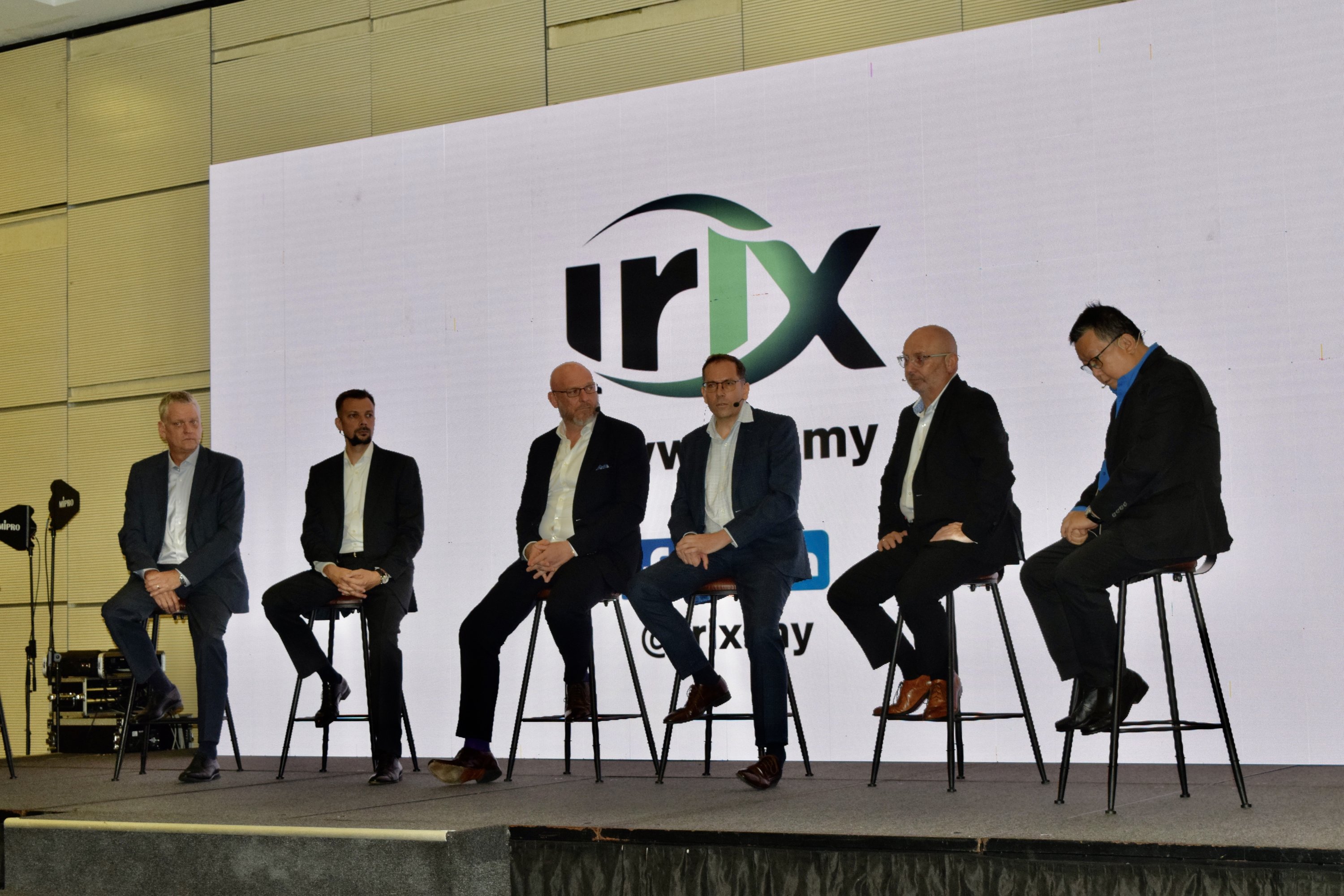 Smith (third right) highlights his points during the panel discussion with (from left) Wihlborg, Nikolaychik, Siddle, Stretch, and Chan. - Photo by Roystein Emmor

He points out one example, which is the state needs more telecommunication towers, and more fibre optics to connect these towers to allow for better internet connection.

“One of the places where internet comes in is our irix Data Centre at Santubong, which is the first and only Tier IV designed and certified data centre in Malaysia.

“It is a highly reliable source of internet content where we have multiple connections from overseas over our subsea cable and terrestrial links as well,” he told reporters when met after the unveiling of irix as the new corporate brand identity of PP Telecommunication Sdn Bhd, here yesterday.

“This means that it’s closer to internet hubs where we need to get the content from.

“In Sarawak, we want to maximise the reuse of existing infrastructure to keep the cost as low as possible so that we can pass those benefits on to Sarawakians.”

Smith said given that Sarawak’s population was quite small amidst its vast landscape, irix would be looking at building its business based on the global market as well.

“Kuching is so well positioned in Southeast Asia. We actually form the shortest route between the east and west of Indonesia, and if you draw a straight line between China and Indonesia, we are not far off that either.

“By creating these ‘highways’, we attract traffic that pays for the infrastructure and allows us as a wonderful by-product to bring the Internet into the rural areas of Sarawak.”

On irix’s digital transformation journey in Sarawak, Smith said the company was very excited to have a subsea cable connecting Kuching with Batam in Indonesia.

“This connects us very close with Singapore, making us an alternative hub to the neighbouring country.”

He also hoped that by working with partners such as Sarawak Information Systems Sdn Bhd (Sains) and Sacofa Sdn Bhd, irix would be able to provide better Internet connection for the people of Sarawak.

“If you think about the internet, it is all coming from content providers and delivered over a superhighway of subsea cable. At present, the hubs in that superhighway are in Singapore and Hong Kong.

“We, in Sarawak, often get our internet connectivity via Peninsular Malaysia from states such as Kuala Lumpur and so on, and then from Singapore and Hong Kong.

“But by having this cable (connecting Kuching and Batam), we now connect directly onto that international superhighway.”

He also said irix would be building part of a consortium cable called SEA-H2X, adding: “(This) will take a branch out into the sea from Kuching connecting with the trunk that goes from Hong Kong to Singapore.

“That will give us more internet connectivity, better performance and lower latency.

“By having the content closer and putting it in Kuching, and having those very fast internet connections, we improve the internet speed.”

At the ceremony, Smith participated in a panel discussion with irix chief marketing officer Dominick Siddle, chief operating officer Dmitriy Nikolaychik, chief commercial officer Steve Stretch, SASA director Anders Wihlborg and Uptime Institute vice-president Patrick Chan, where they talked about the role and aspirations of irix in view of the organisation’s intention to further reiterate its vision of becoming an alternative regional economic and communications hub in Southeast Asia.