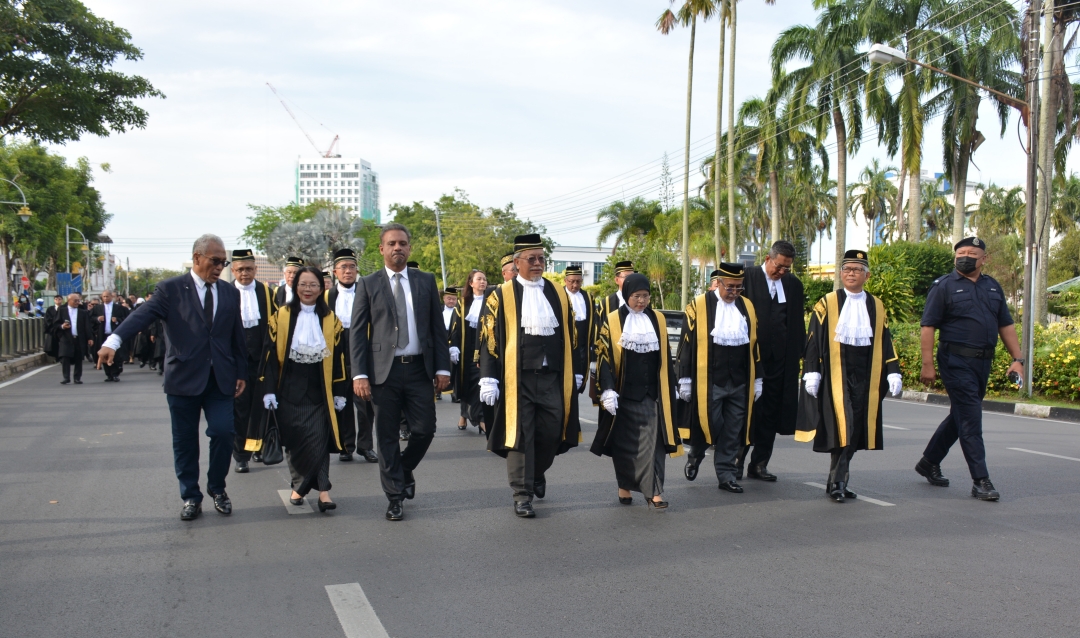 Tengku Maimun (front, centre) leads the procession of 'Legal Eagles' run in conjunction with OLY 2023 in Miri. Seen at third left on the front row is Ramkarpal (third left), while on the Chief Justice's right is Abang Iskandar.

MIRI (Jan 14): The digitalisation of the courts in Sabah and Sarawak will continue to be enhanced, in line with the ongoing effort to deliver a world-class, high-technology justice system.

According to him, the aim in the judiciary has always been to deliver a justice system that is independent, responsive, efficient, pioneering and one that staunchly upholds the rules of law.

“The digitalisation of the Sabah and Sarawak Courts started more than a decade ago.

“Today, we have continued to introduce disruptive technologies into our justice system in order to be future-ready,” he said.

He pointed out the Artificial Intelligence in Court Sentencing (AiCOS) system as an example, in which it had continued ‘to be fed with’ sentencing data for offences under Sub-Section 12(2) of the Dangerous Drugs Act 1952.

It would also be implemented for offences under Section 380 of the Penal Code within this year.

“The redevelopment of the Integrated Court System (ICS) is also underway through the e-Kehakiman Sabah Sarawak (eKSS) project,” said Abang Iskandar, adding that throughout last year, the majority of the courthouses in Sabah and Sarawak had undergone digital makeovers with the installation of new hardware and software for the Court Recording Transcription (CRT) system.

He also said the eCourt Finance (ECF) system had been integrated towards digitising monetary transactions in courts.

“These are all necessary accompaniments in order for the judiciary to deliver efficient services to members of the public and stakeholders.”

Talking about the performances of the courts throughout 2022, Abang Iskandar said the High Court of Sabah managed to dispose 51 per cent of 6,219 registered civil cases and 61 per cent out of 840 registered criminal cases.

These numbers, he said, included cases carried forward from the previous years.

“Whereas the High Court of Sarawak had disposed 50 per cent out of 8,349 registered civil cases, and 289 out of 1,259 registered criminal cases.”

The OLY is an annual event that is being rotated between Sabah and Sarawak.

For this year, it kicked off with a procession from Pullman Hotel Miri to Miri Courts, followed by a court proceeding in the open courtroom.